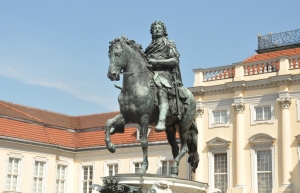 No wonder more and more economic refugees from the west settled on the banks of the Elbe, Havel and Spree. The native Slavs, who were now a minority group, likewise profited from this situation as they got the same rights as the immigrants, with whom they eventually merged, forming a single population group. Around 1250, the land as far as the Oder had been cultivated and in the century which followed, the river was crossed. Brandenburg, which had once been so insignificant, now grew into one of the most populated and powerful areas of the German Empire, and this was demonstrated when the Margrave was raised to the rank of Elector, a title which only seven people were allowed to hold.

A second area to be cultivated was Prussia. A group of Teutonic Knights who had returned from Palestine settled along the Baltic coast, subdued the heathen population and invited Dutch peasants to cultivate the region to the east of Danzig. Here, in ‘the rich country of Prussia’, was indeed the village called Holland that Vondel had heard about. A bond continued to exist between those who had moved away and those who had stayed at home, as we can establish from the fact that Count William IV of Holland went three times to the aid of the migrants when they came in conflict with the native population.

When the Black Death ravaged Eastern Europe, the social consequences were dire for the peasants there. In the west, they had managed to get the same freedoms as their counterparts in Holland, but in the east the peasants, who as Hollanders had been so free, lost all their rights. Because labor was scarce on the land, the crusaders prohibited the towns from admitting peasants. The commander of the Teutonic Knights gave the sheriffs far-reaching powers to ensure the ban was observed: the sheriffs were even allowed to carry out executions. (How they thought to stem the exodus from the land by executions is one of the mysteries of medieval judicial procedure.) The rulers of Prussia, Ermland, Pomerania, Brandenburg, Mecklenburg, and Saxony forbade the peasants to move. Teutonic Knights and sheriffs bought up large tracts of land or just took possession of them. More and more often knights and sheriffs behaved as feudal lords. The Elector of Brandenburg and the commander of the crusaders not only agreed to this state of affairs, but even forced the peasants to perform services at the court of the local nobility. Peasant revolts were crushed mercilessly and towns like Berlin, which had been so unwise as to lend humanitarian help to the rebels, lost their privileges.

The people who profited most were the Junkers, a new kind of nobility that emerged in the fifteenth century from the ranks of the knights, the sheriffs, some rich townspeople and the Slav aristocrats. Around 1550, the dominance of the Junkers was complete. They were the highest judges in the tens of villages spread across their enormous estates. A century later, in 1653, Frederick William III, the ruler of both Prussia as Brandenburg, signed an agreement by which the aristocracy waived the exercise of their power in the meetings of the Estates. In exchange, they were assigned all their peasants as serfs. It goes without saying that this was done on condition that the new lords would protect their serfs ‘like fathers’ and pass judgments ‘with the just mildness of a father’. This was certainly not a dead letter: the Junkers did not behave as tyrants towards the people they dealt with on a daily basis. Nevertheless, such paternalistic protection was the last thing most peasants were looking for. While all over Europe feudal relationships had come to an end, Brandenburg and Prussia had now become completely feudalized, for the first time.

It was a counter-development in every sense of the word: in the west the peasants had gained their freedom, the towns were flourishing and the nobility had lost its influence; in the east, the sun had set on the towns, the peasants had been reduced to serfs and the rank of Junker had emerged. The explanation for this is that the Junkers had access to international trade. As we have seen, the towns of Holland bought grain from the Baltic region. Their trading partners were the Junkers, who earned money in this way for the acquisition of larger and larger estates. In other words, Western Europe prospered at the expense of the peasants living east of the Elbe. Eastern Europe was the first victim of western economic expansion, a third-world country avant la lettre.